Lead Screws are remarkably common components, and can be found in engineering environments operating lathes, CNC machines or complex robotics, but they can just as commonly be found around the home, in conventional products such as printers or DVD drives.

A Lead Screw’s main purpose is to rotate, using its teeth (or single tooth) to push a Lead Screw Nut forwards and backwards in small, very precise increments. By rotating with a Nut attached, a Lead Screw converts rotary motion into linear motion.

The ‘lead’ of a Lead Screw is the distance which a Lead Screw Nut will move during one 360° rotation of the screw. A smaller Lead results in a tighter thread, which allows for more precise movements per rotation.

The ‘starts’ of a Lead Screw are the number of teeth on the Screw itself. A larger number of starts results in a more robust mechanism with a greater ability to transmit torque, but multiple ‘starts’ can sometimes be incompatible with a small ‘lead’ due to space limitations.

Lead Screws are becoming increasingly useful in markets requiring very intricate movements and ultra-high precision actuation. These include including high precision robotics, as well as animatronic limbs, and also in hospital equipment such medical equipment such as centrifuges and automated pipetting systems.

One of the most common applications of lead screws is for positioning the print head in 3D printers. They often use 8mm lead screws as demonstrated in the video below. The concepts explained above are all shown in the first few seconds of this video: 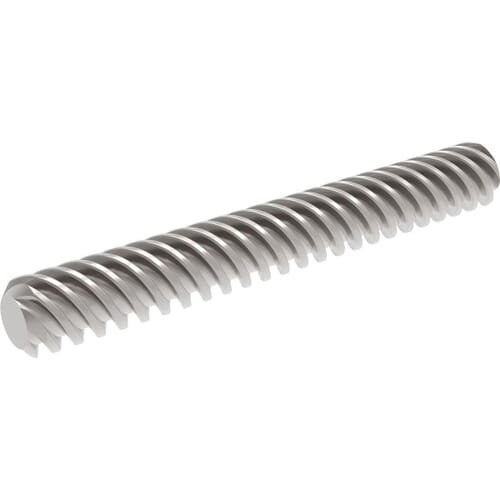