Thanks to Leon Yao & Lisa Doetsch, together with the UCL Rover team for this excellent guest article. Leon & Lisa are team leaders  on the project and kindly shared their knowledge about the history of these amazing feats of engineering!

Accu have sponsored the UCL Mars Rover team since 2018.  UCL’s teams entered the European Rover Challenge (ERC) in 2018 and 2019 and plan to participate in the University Rover Challenge (URC) in 2020. (Update URC 2020 has been cancelled due to COVID-19, if ERC goes ahead the UCL Rover team hope to be there!

Extraterrestrial rovers are one of the most fascinating parts of space exploration. Rovers (also called moon buggies) are planetary surface exploration vehicles designed to survive and explore the surface of another celestial body. These devices are particularly interesting from an engineer’s point of view, as they illustrate the engineering challenges and successes of each decade.

As part of the UCL (University College London) Mars Rover Team, we researched into the evolution of extraterrestrial rovers between 1970 to 2020. Learning about rovers from the past has given us some incredible insights into the design and engineering of rovers. In this article, we explore how unmanned rovers have evolved over the last 50 years; we also take a glance at the future prospects of rover exploration, and the endless possibilities that are yet to come.

Over the last 50 years, there had been numerous missions to explore the outer space, it’s been a long journey for scientists and engineers to overcome one obstacle after another. Today, there had been 8 successful unmanned rovers that have landed on the moon or mars, and we are expecting more and more missions in the upcoming years. In the section below, we will briefly discuss one lunar mission and three mars missions from the past and see how rover technology has evolved over time.

It all begun in 1970. After the US had sent the first men onto the moon (Apollo 11 mission), the Soviet Union was the first country to have sent an unmanned rover to explore the surface of the moon. The aim of the mission was to image the lunar surface, examine ambient light levels, measure local magnetic fields, and perform laser ranging experiments from Earth. The rover, named Lunokhod 1 (“Moonwalker” in Russian), was the first ever unmanned rover to have successfully landed on an extraterrestrial body. Its successor, Lunokhod 2 was also landed successfully on the moon three years later. 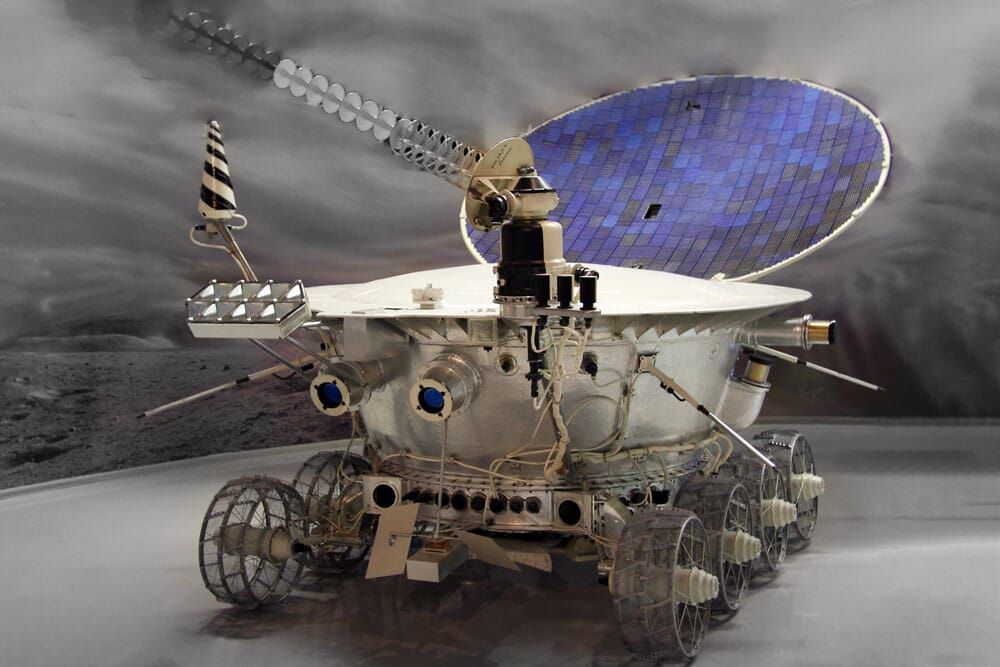 In retrospect, the Lunokhod rovers were extremely successful engineering devices. Lunokhod 1 operated for 10 months travelled a total distance exceeding 10 km. For comparison, in the first six years of operation of Opportunity, it has only travelled for about 12 km.

The Lunokhod rovers were powered by solar power during the day and relied on thermal energy from a polonium-210 radioisotope heater. Lunokhod 1 was controlled remotely by operators on Earth, with a 5-second communication delay – a tremendously difficult task with high risks. Lunokhods also carried various scientific equipment such as a penetrometer (to measure soil density), X-ray spectrometer, X-ray telescope, and cosmic ray detector. 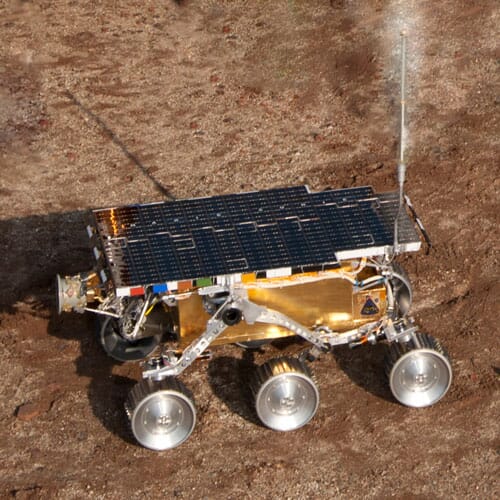 Sojourner’s dimension was only about 48 cm wide by 30 cm tall and weighed 10.6 kg, NASA describes it as a ‘micro rover’. In fact, Sojourner is the smallest rover that has been sent to mars. Despite its small size, Sojourner played an irreplaceable role in mars exploration. It was the pioneer of mars rovers whose many features still remain visible in rovers today.

One of the most remarkable features of Sojourner was the rocker-bogie suspension mechanism, a mechanism which rovers today still inherent. It provides great stability and obstacle-crossing capability for the rover and is one of the most crucial design components that allow the rover to navigate the uneven Martian surface. The rover was powered by solar panels during the day and non-rechargeable lithium battery to keep the rover heated during the night, which meant that the rover had a limited lifetime.

Spirit and Opportunity were twin rovers that landed on Mars on January 3rd and 24th respectively. Together they discovered that long-ago Mars was wetter, and that conditions on Mars could have sustained microbial life, if any existed. 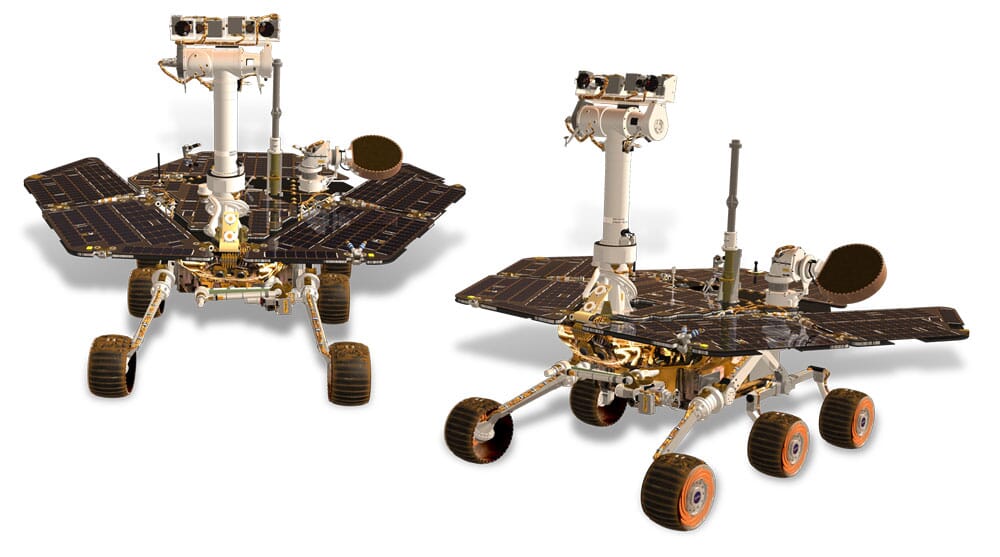 The scientific payload of the Spirit and Opportunity had seen a significant upgrade since Sojourner. There are two panoramic cameras which took detailed, multi-wavelength, 3D panoramic pictures of the landscape; microscopic imager which took high resolution images of rocks and soils; and rock abrasion tools for drilling into rocks and surfaces.

Thanks to the then recent developments in microchip architecture, Spirit and Opportunity had 1000 times more onboard memory compared to Sojourner, which allowed the rovers to gain autonomous planetary mobility, the stereo camera image is mapped onto a 3D terrain, and subsequently the rovers decide the safest and most efficient path itself. The suspension system is adapted and improved upon the rocker-bogie system of Sojourner.

One of the engineering challenges that Spirit and Opportunity still faced was the source of power. The rovers were still powered by solar panels, but  improvements in battery technology led by the mobile revolution in the early 21st century meant rechargeable lithium batteries were now providing an energy supply that could be easily replenished. This did mean the rovers were only able to explore the equatorial regions where there were regular opportunities to recharge during daylight hours.

Curiosity is the latest rover that was sent to mars and is the only rover that is currently in operation, and its purpose is to investigate whether conditions have been favorable for microbial life and for preserving clues in the rocks about possible past life. In comparison to its predecessors, Curiosity was another significant upgrade in almost all aspects of the rover. 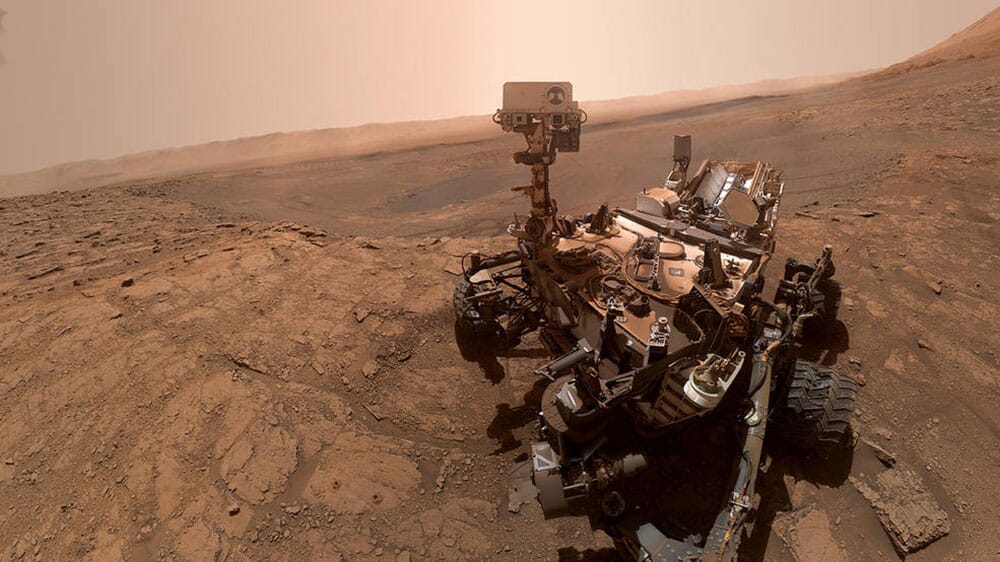 One of the most remarkable changes compared to earlier rovers is that Curiosity is about 5 times heavier and contains a payload more than 10 times as heavy. It contains equipment to gather and process samples of rocks and soil and is able to distribute them to onboard test chambers.

The engineering challenge regarding power has also been overcome by Curiosity. It relies on a radioisotope power system that generates electricity from the heat of plutonium’s radioactive decay.

The rocker-bogie system is still adopted with six wheels each with its own independent motor. The two front and rear wheels have individual steering motors and if needed, the rover can turn 360 degrees in-place. The wheels are made from aluminium, with cleats for traction and curved titanium springs for support.

Curiosity’s wheels have been reported to be damaged by wind-sculpted rocks, and there had been an issue with the active computer’s flash memory. Nonetheless, it is still operating in a healthy condition at the time this article is written, and we expect it to continue exploring in the years to come.

By observing the evolution of mars and lunar rovers over the last 50 years, we have gained valuable insights into how engineering challenges have been overcome by engineers. There had been persistent improvements on both the hardware and software of rovers, and almost often increasing the performance by an order of magnitude.

On the other hand, the scientific payload of every generation rover keeps improving – both in quality and quantity. Whilst the category of equipment remains similar, their quality and performance improve drastically for every generation of rover. Furthermore, the size and weight of the rovers also increases over time, as a result of improved rocket technology that is able to carry more load. Lastly, as scientist and engineers learn more about Mars each mission, the knowledge and experience continue to help us build rovers that are more reliable and adaptable to the Mars environment.

The upcoming year, two exciting rovers are planned to launch for Mars: NASA’s Mars 2020 rover and ESA’s ExoMars rover, Rosalind Franklin. Both missions take the next step in the key question of Mars exploration by searching for signs of past microbial life itself.

The Mars 2020 rover has a drill that will collect samples of promising sites and set them aside in a cache for a potential future return mission to Earth. The rover will also gather knowledge and test technology that is relevant for future human expeditions including a method for producing oxygen from the planet’s atmosphere and landing techniques. The design of the rover is based on Curiosity and uses a lot of its spare parts. Upgrades include the new wheel design with more advanced aluminium, a new threat lining for steeper climbing and a shape that allows for a larger diameter, maximizing performance. Another interesting addition is the Mars Helicopter Scout, a drone that will test the possibility to fly on Mars and could be used to map out routes or study hard to reach areas such as craters

The ExoMars rover is a lot smaller, only having a mass of 300 kg, one third that of Curiosity. Just like NASA’s rover, Rosalind Franklin has a sub-surface drill for sampling, down to a maximum of two meters. Samples will be analysed directly by scientific instruments, called the Pasteur payload, to detect morphological or chemical life signatures. Unlike NASA’s rover and Curiosity, the rover uses solar panels to generate the required power and survives the nights by using novel batteries. An unusual feature is the ability to individually pivot the wheels and adjust the Rover height and angle with respect to the surface, also creating a walking ability, which is useful in soft and non-cohesive soils.

At the same time, missions to the moon are becoming more common. For example, China, who just broke a record with Yutu-2 as the longest working rover on the moon, are working towards their next lunar mission for sample return. Many other agencies are planning missions including Roscosmos, North Korea and various private companies such as Astrobotic technology and PTScientists.

Today, the way space missions are developed is changing. In the past, space exploration has often resulted in rivalry between countries; successful space missions were proof of a country’s technological power. This rivalry caused the space programmes to receive a lot of funding from the government. Nowadays, there are more and more missions that are results of international collaboration. The Rosalind Franklin rover is a joint effort of ESA and the Russian Space Agency Roscosmos; China and Russia are teaming up to explore the moon; and of course, there’s also the international space station.

Furthermore, it is no longer just governments who are involved in the space race anymore. Since the legislation of privatized space travel, companies such as SpaceX, Virgin Galactic, and Astrobotic Technology have entered the industry. This will accelerate the production of smaller, cheaper, and more efficient products by allowing for contract competition between the companies. Nevertheless, it is worth noting that national space agencies will still lead the way in technologies and missions the market cannot support. Often these are scientifically relevant but lack the direct return of investment necessary to be commercialized.

It’s only the beginning…

Extraterrestrial exploration will continue to be one of the most exciting events to look forward to in the years to come. This article provided a brief overview on the evolution of rovers, future rovers, and their impact on the world we live in today. We’ve only scratched the surface of all the projects and missions that have happened in the past, are going to happen in the future. Yet this is exactly what makes the topic so interesting – extraterrestrial exploration is mankind’s attempt understand the unknown, and we still have a long journey ahead of us.

One final thanks to Lisa & Leon from the UCL Rover 2020 team for contributing this article. Take a look at what they are up to here: UCL Rover Website